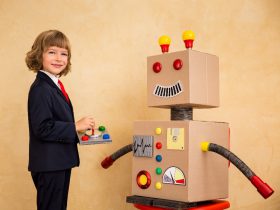 How Have Robots Changed Our World Today

A foldable phone or a foldable wallet? If you have to ask yourself this question, then it’s a wise decision to digest a review before making any choices. You’ve heard of it, the whole world has. The Samsung Galaxy Fold is a phone that got the world’s attention with its announcement in February of this year. With that announcement came a lot of hype and anticipation for its release. Today, we will provide a Samsung galaxy fold hands-on review.

So, if you’re excited about this device, stick around to learn why this hefty $2000 smartphone might be for you.
However, it’s best to remember that this device is not following any industry standards. Therefore, this iteration is not Samsung’s full vision for a foldable smartphone. That being said, the Samsung Galaxy fold is definitely comparable to all the current flagships on the market today.
On the horizon, the Huawei Mate X is also releasing to claim the spotlight of the Samsung Galaxy Fold. But, this is a Samsung Galaxy Fold review, so it’s best to take the details in this article for Samsung’s foldable device alone. Regardless of the similarities with Huawei’s foldable smartphone.

On that note, let’s discuss the release of the Samsung Galaxy Fold.

What are the updates to the Samsung Galaxy Fold after the release delay?

If you didn’t know, after the February reveal of the Samsung Galaxy Fold, the original release was in May. However, due to some complications involving the durability and overall readiness of the device, Samsung had to postpone the release. Now, in September, the device has received an official release.

With this official release, Samsung has made some updates that will make the device last longer and work much more effectively.
On September 6th, the Samsung Galaxy Fold received its first commercial release in South Korea. France, UK, Germany, and Singapore will release the Fold on September 18th. The device still sports an expensive $2000 for the base model.

Samsung will release both 4G and 5G variants of the Galaxy Fold. With the 5G variant, people will get a slightly smaller battery — a small sacrifice for 5G technology. Currently, we have no information regarding the price difference with the 5G variants. In the UK, this device will be exclusive only to EE. Consequently, you will only have the option of the 5G variant. The device will receive marketing as the Samsung Galaxy Fold 5G in the UK.

The Design of The Samsung Galaxy Fold

As a foldable phone, the Samsung Galaxy Fold possesses an intuitive design and form factor. This device pushes the limits of what we can call a smartphone today. It does this with an elegance that stamps Samsung’s deserved spot as a top smartphone manufacturer.
The screen of the Galaxy fold can fold in on itself for protection in a manner reminiscent of laptops. Samsung definitely took its time with this one. On the Samsung Galaxy Fold, there were over 1000 different prototypes, experiments, and tests to ensure the phone was in line with Samsung’s vision. The Fold has been 10 years in the making so far, and it shows.

The phone is natural to open and close with its book-like folding mechanisms. Opening this device reveals a 7.3-inch display that sports a 20-part dual-axis hinge. With this flexible and sturdy hinge, you can ensure your device doesn’t fold past a 180-degree axis.
When it’s folded back up, it snaps shut with a satisfying sound that leaves you with a feeling of safety for your device. With the sturdiness of the hinge, you’ll surely be relaxed without worrying about it accidentally opening.

On the dual-axis hinge, Samsung has invested time in its durability. These tests give credit to the tactile and snappy feeling the device gives when you switch between its two states. With this design, the device can withstand over 200,000 instances of folds and unfolds. This means the device can last you for over five years if you fold and unfold over 100 times a day. Granted, it’s unlikely you’ll need up to 100 instances of this process.

The Samsung Galaxy Fold has two screens. At the front of the device when unfolded, there is a 4.6 inch Super AMOLED HD+ display. This smaller display is great for navigating Android, checking notifications and navigating your music player. The display is extremely clear and provides great color for all your simple tasks.

For the larger display, there is a giant 7.3 inch LED QXGA+ Dynamic Amoled display. Quite a mouthful, in summary, it’s a crisp, clear, powerful, immersive and bright display. The display also supports HDR10+ which gives you an enhanced video viewing experience. The screen also sports a great contrast ratio for viewing outdoors, and it provides a great viewing experience at any angle.
You should remember this though; the screen has a crease that runs down the middle of the device. It’s only noticeable when you look at it from an angle. But, we can’t determine how that will affect your experience.

However, judging from our time with the device, the crease shouldn’t be much of a problem. If you’ve ever owned an X generation iPhone, you’ll notice the notch during your first couple of weeks. But over time, it will be less pronounced, and you’ll just see it as something natural with the phone.

User Interface and Performance of the Samsung Galaxy Fold

Because of the different ways this device can be operated, you have some options available to determine how you use the device. The phone mode of the device is best for quick tasks like switching music or viewing what your notifications are about.

This smaller mode works as you’d expect any modern-day smartphone to work. It performs tasks without hiccups and works seamlessly. However, nobody will want to deal with those huge bezels. So that’s why tablet mode exists. The phone model is best for smaller operations.

But, once you open it up to tablet mode, you’ll have a better experience with the Galaxy Fold. Tablet mode allows you to access a larger and more interactive screen. This mode also allows you to access social media, gaming, web browsing, and messaging apps. Even better, it has a great screen for video editing. You can perform all your editing tasks with ease due to the well thought out design.

Intuitive Features of the Galaxy Fold

A great feature with the fold is that every time you switch between phone mode and tablet mode, you’ll get a smaller or bigger version of the app you were currently using. All the Samsung Apps, Google’s pre-installed apps and Microsoft’s apps support this switch. And, in the near future, more apps will support this.

Another interesting feature of we’ve encountered in this Samsung Galaxy Fold review is the multi-tasking features of the device. Simple tap and swipe gestures get your apps arranged in multiple windows. You also have the chance to arrange these apps to your preferences seamlessly.

Gaming makes use of the full capabilities of the display. When playing Asphalt, the display rotates a full 90 degrees and this makes your experience richer. How? Well, a bigger display for gaming but also, you get to hear the stereo speakers from the device.

The Galaxy Fold also sports 12 GB RAM and has tailored optimizations for a snappy and precise experience. This, combined with Android 9 and Samsung’s One UI makes your tasks easy to access. You also get access to a whopping 512 GB onboard storage. This, combined with expandable cloud storage gives you enough space for all your activities.

The Samsung Galaxy fold comes with six cameras in total. Yes, you read that right. There is a triple camera setup on the back of the device. In front, the Galaxy Fold has three cameras as well. The back camera setup is great and is the same setup as the Samsung flagship, the Galaxy S10.

These cameras are great for all your photo and video needs. It has a stable recording with a clear and full-bodied microphone, takes great images in low light, and has nice ultrawide images. All creators can benefit from the setup with the fold. When you combine the great camera setup with its nice video editing features, you get a device perfect for video and photography creatives.

The battery life of the Samsung Galaxy Fold is also super good. With 4,380 mAH, the battery is quite bulky. But when you factor in the QHD+ display, the battery life might be a bargain. So, how does it perform? It’s pretty decent, to be honest. The Fold doesn’t quite last all day but judging from its target audience, it will be put through the rounds with many uses for it. It still has great fast charging capabilities that will substitute for its less impressive battery life.

Samsung has finally created its folding phone. In this Samsung Galaxy Fold review, we’ve tested and assessed this device. And, judging from what we’ve seen so far, we are loving it. The Fold definitely deserves a chance and we hope Samsung has successfully pioneered a new age in the smartphone industry.